Need Help with Your LaSpaziale S1? You're in the Right Place!

I bought my Vivaldi S1 version 1 used through Craigs List for $750 and I probably got what I paid for - it was a bit rough. Here's what I started with:

There was a sticker on it from it's previous home: "The Scooter Store" which I thought was some sort of hip Vespa dealer which made me happy. Nope. It was from the place that makes those scooters for fat people suffering from terminal laziness which I've spent a good part of my life making fun of. Oh, the irony...

It showed up with a pod setup and heavily scaled boilers and a general cover of grime. I tried to backflush it but the gasket was so hard it wouldn't even seal in the least. I knew it would be a while before I ever got a shot out of it. I was lucky to have a weekend alone and a day to order the parts from Chris Coffee who probably made as much or more off of me in parts as they would have if I'd bought a new machine. I've done this before: buy a used machine (motorcycle) for much less than it's worth and then proceed to pour more money than it's worth to restore it and I should have just bought the new one. In this case I actually did manage to save some money. Here was my weekend:

The boiler wasn't so bad:

The steam boiler was so bad though that I didn't take "before" photos because I thought it might be a lost cause. It was so heavy and thick I didn't think I'd be able to get it clean. I went to Home Despot and found some lime/scale/rust cleaner and plugged the boiler up and soaked it for almost a day with only some of the scale flaking off. Here's the stuff I used:

I discovered that heating the solution and using it full strength made a massive difference so this is what I did:

I'm sure this is wrong on many levels but I just didn't want to have to drag it out my shop space in Jersey and bead blast it - it also seemed too thick since I couldn't even chip it off. So, while I don't have any shots of the boiler before here's some of the scale that came out of the machine and part of the group gasket that I had to chisel out:

While this was going on I was soaking the group head in a similar solution:

It took the better part of a day to get here.

After a solid weekend of scrubbing, descaling and installing new parts I got it running. I installed a new board, motor mounts, steam valve (leaking), arm and various gaskets and repaired some broken wires and mounts. It took a while to dial it in and for the most part I'm still doing that. My goal was to be able to make a cappuccino as good as 9th Street Espresso since I no longer live next door to them and my addiction to excellent coffee had to be sated. It's been fun to restore the machine and to learn how to coax good espresso out of it. I've got a ways to go but every morning I get to enjoy a great cappuccino. So, now that it's all done, here is my setup. I've got a Rancilio MD40 that a friend found in his building. I spent the week before the Vivaldi showed up stripping it (literally) down and then polishing it and installing new burrs.

While I was at the shop cleaning and polishing the Rancilio I took a few minutes to make a WDT funnel out of some aluminum tube to fit the portafilter - I tried the yogurt cup but it just didn't sit well with me on several levels. I also had some dental tools I used for prop styling so I took the one with the small spoon (for Cafiza) and ground it to a point to stir the coffee then tamp it.

Which brings us to here, what all of this was about: 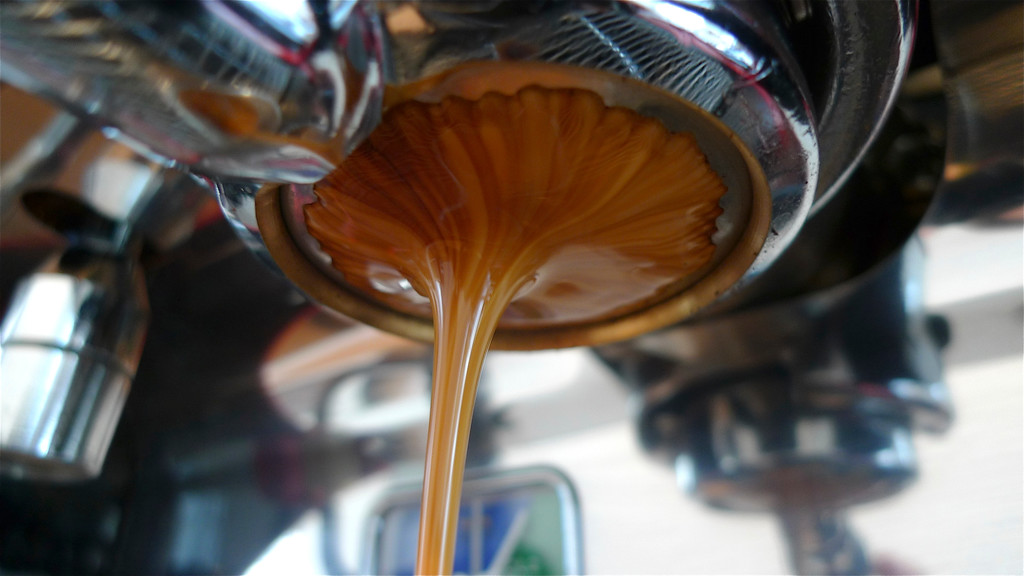 Thanks to everyone on the this board because without the S1, VI and VII sites I might not have embarked on this but all the information here made this a fairly painless process. Special thanks to Tim from Chris' Coffee who helped me when I had questions and made sure all my parts showed up.

is it your kitchen? It looks very big. Why so many fans?

Yes, kitchen slash dining room. My girlfriend is a chef so that explains the excess knives and ridiculous ice cream machine. The fans are my collection - all deco, machine age style. Ebay is to blame for that...
_ _ _ _ _ _ _ _ _ _ _ _ _ _
www.gregorhalenda.com
Top

Nice work! No matter how bad these espresso machines look 98% percent of it turns out to just be old coffee or scale. A good cleaning & they look like new unlike a rusty car or motorcycle. I went the bead blast route but almost all my scale was on the element & I have a nice cabinet in my shop. Since you bought a new board I assume you are now up to V2 specs?
Speedster/Bosco Sorrento/ K10WBC/K30/Bunnzilla
KvdW/Pullman/RB Tampers
Hario NCA 3 & 5s/Wooden Neck Dripper/Buono
Zassenhaus Knee Mill
Modded Hottop B
Top

You not only saved some dough, you gained experience on working inside these machines

Awesome job. I have always been a tinkerer, but have not had the need yet with my machine, like I did with my prior two machines, Gaggia and Trevi Spidum. These Vivaldi

beauties are so well built I guess there is no real need to by them new!
Vivaldi S1 and my buddy Rocky
Top

Hi, I don't know if the OP is still around, but it'd be glad to update the broken links of the photographs

I am around but that damn apple gallery debacle killed all my galleries. It has been a massive pain to find the the right photos and repost them but i do still have them so I will endeavor to make this whole again. Or close to it.

Gregor, Me and many S1 V1 owners will be glad with you :)
Be in Peace,

I understand as I did a lot of looking through here when I was trying to rebuild my machine - the photos are very helpful addendums to the manuals. I guess the best thing I can say is that since the rebuild my machine has been pulling perfect shots for years now and I've had no need to do anything but enjoy it. Someday when the chance comes I'll upgrade I suppose but it's hard to imagine a better value for the money.

Don't hesitate to remind me when I forget to update this...

Firochromis wrote:Gregor, Me and many S1 V1 owners will be glad with you :)

Bumping this thread in hopes Gregor still has his photos.

Our 2004-build S1V1 is headed for some TLC. It has been absolutely flawless but it's definitely time for an overhaul.

I've been busy reading through all the maintenance/restoration threads and very much appreciate the time folks took to post photos.

Firochromis wrote:Gregor, Me and many S1 V1 owners will be glad with you :)

Bumping this thread in hopes Gregor still has his photos.

Our 2004-build S1V1 is headed for some TLC. It has been absolutely flawless but it's definitely time for an overhaul.

I've been busy reading through all the maintenance/restoration threads and very much appreciate the time folks took to post photos.

Ha, I do still have them. It's taken me a very long time to find them but I did tonight. I haven't been on here in years! Years! Which isn't to say it's not valuable but rather that my restoration went so well that I'm now going on 8 years of daily espresso with absolutely no trouble. That's pretty dang cool. In that time I've had two kids and moved to Portland, OR and the machine has stayed with me. It's boiler has warmed up countless baby bottles and now it makes a wicked hot chocolate for my boy and girl - ages 6 and 7.

And every single day I pull at least one shot with it.

Today I was looking for a closer option for a new group gasket as it burns them up in about 6 months (the machine has never been shut off in 8 years) and I saw that a member here was making them in silicon so I just ordered some from him. I never use my Scace but I still send it out on occasion to people who find me. I started roasting coffee 6 or so years ago and found a good profile and that was that. Perfect coffee every day.

I just read through this thread and thought I'd add a comment about my experience with CLR. It was many years ago that I tried using CLR on an espresso machine and although it really did clean the gunk out ... I could never, ever get the smell out of the boiler. I could always taste the CLR and no amount of rinsing/washing/flushing could ever remove it. Just thought I'd toss that out there for anyone who has a sensitive nose and taste. I've had terrific success using white vinegar and it rinses out easily without leaving an odor or taste.
Top

Ha, I do still have them. It's taken me a very long time to find them but I did tonight. I haven't been on here in years! Years! Which isn't to say it's not valuable but rather that my restoration went so well that I'm now going on 8 years of daily espresso with absolutely no trouble. That's pretty dang cool.

I just realized I never said "thank you" for coming back and posting those photos - I guess I got too wrapped up in going through them!

So THANK YOU - this is what makes this forum so valuable to us S1 owners!